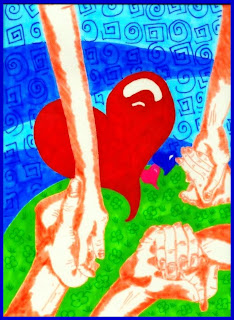 It is a new year.  2012, in fact, the beginning, and a time to pause for reflection.  This time last year, I was writing a farewell 2010 blog.  2010 was a tough year to top.  It was the best year of my life.  I moved in with my then boyfriend, Adam.  We had our daughter, Carmen whom we call Shiny.  Then, I married boyfriend, Adam and he became husband Adam.  At the end of a year like that, its hard to really hope for a whole lot for the following year, and I was kind of expecting 2011 to more or less suck in comparison.  It was a happy year in many ways as I got to bask daily in a bounty of blessing causing me many times to shake my head and wonder how I ever came to have such a beautiful life.

I have an amazing husband and a marriage that is literally like a dream.  I’ve never been exposed to any better marriage, never even seen one in the movies.  Just today, we had at least ten bouts of uproarious laughter, and we didn’t even do anything other than laundry, and cutting out 311 hand drawn guitar picks.

I also have two simply wonderful children.  Jacob is my five-year-old son, and he is absolutely hilarious.  Even though he does spend a lot of time around hilarious people, its hard to imagine where he ever got to be so funny so young.  For instance, he proposed to his 6-year-old friend, Adriel last week.  Her response was a screamed “WHAT THE HECK?”  He happily accepted that as a yes.  The next day, he was discussing his engagement with his friend, Eva.  I heard him in the back seat of the car telling Eva that he planned to take Adriel on a cruise next year for Thanksgiving.  Eva related that she was pretty impressed, and that Jacob sounded like pretty sound husband material.

“How would you pay for that?” asked 9-year-old Eva.

Jacob chuckled.  “Pay?  I don’t pay, my woman pays for everything.”

Insert uproarious laughter.  Later that evening, I also discovered that Adriel had completed one page of Jacob’s preschool homework while she’d been at my house the day of his big proposal.  Maybe her “what the heck” was a yes, who knows?  This child absolutely has me in stitches every single day.

And then there is Jacob’s little 1-year-old sister.  She is equally amazing, and they complement each other so sweetly.  She is shaping up to be every bit as funny as her silly older brother.  Today, she ate a cookie while sitting “Mork from Ork” style on the couch.  Head down, butt up.  Whenever she wants something, she says thank you before she tells you what she wants.  She is unbelievably bright.  She has done everything early.  She can sing the abc’s up to the letter v without assistance (she does leave out lmnop though) and she is only 15 months old.  Bright is what my children are.  Bright spots in my world, the best part of my story.

Also this year I worked for a short time at Steak N Shake on Stringtown Road in Grove City, Ohio.  That was a GOOD time!  I meant some people there who I believe that I will be friends with for the rest of my life.  (They’re all like 12 or so years younger than me, so I know they can be my friends for the rest of my life because I will die way before them, sorry just a little hat tip to the fact that I felt really really OLD working there.)  I had a GREAT time working at Steak N Shake, best restaurant I ever worked for.  But, also while working there, ironically, after 18 years in the food and beverage industry, I decided to totally switch gears and quit that whole restaurant thing.  Despite the fact that 2 months after quitting the restaurant biz, I obtained a bachelor degree in business management with a restaurant hospitality concentration…  Hey, you know, its whatev I guess.  I’m an expert in the field of food and beverage.  I have extensive front of house experience, management experience, and have learned to be an excellent cook.  I could walk into almost any restaurant in the country and run it with little or no training.  That’s not a healthy ego talking, that is knowledge, education, and experience talking.  There aren’t very many people out there who could bring to the table what I can bring and that is a fact.

However, it is my top professional goal to never, ever, EVER, step foot in a restaurant as an employee again.  If that does happen, it will be a dark day for me.

But alas, in some ways 2011 infact did suck.  My husband and I live essentially separate lives.  He is a truck driver.  He began driving in the tail end of 2010.  Having a baby made him suddenly go insane and decide to be responsible and provide for his family.  I know, crazy.  He gives us a beautiful home and provides me the opportunity stay home with these wonderful children instead of leaving them in someone else’s care while I leave the home to work.  We have everything we could ever want or need because of him.  He supports my COMPLETELY insane decision to 86 everything I’ve spent my life working for to pursue a career as a writer and artist.  He works very hard to make our future financially secure.  All of this is really wonderful and a blessing to be sure.

However, I found the great love of my life but spend most nights sleeping alone.

Right now, its just the easiest and best thing for our kids to keep things going the way they are while we work to find other ways to make things work in the future.  Such as any way that won’t suck. 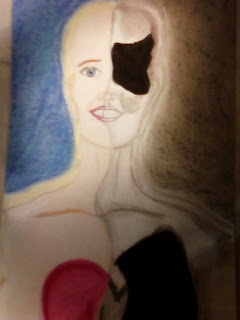 And, the other rather suckish part of 2011 was a chronic struggle with lingering postpartum depression that never went away.  I had struggled with bouts of diagnosed clinical depression for several years prior to Shiny’s birth.  However, 6 weeks out from her birth, I had spiraled into such a dark place that I called my doctor one day and begged for help in hysterical tears.  And they did help me, that day.  I began taking a low grade anti depressant that I had used in the past.  Though it did help, it was not as effective as it once had been for me.  In the spring of 2011 I was basically a complete wreck.  I cried all the time for no apparent reason.  I went back to my doctor and made the difficult decision to stop taking the low grade anti depressant and begin taking Cymbalta on a permanent basis.  I have always had very mixed feelings about anti depressants, so that wasn’t really a decision I made easily.  But life for me had become like being stuck under water, fighting to get to the surface where I could see my family reaching for me, but never being able to get there.  It was horrible.  So I decided that if taking a small pill every day was all it took to get me above the water, then so be it.  That was the best thing I could do for the people I love most. 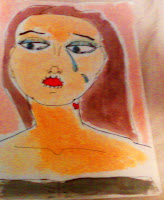 The flip side of a deep depression was a subsequent out pouring of art and writing.  I have always liked to indulge in creative pursuits, but this last year had been an amazing journey for me artistically.  Something in me has opened that I hope never ever closes again.  I have recaptured something that I had lost a long time ago.  Maybe that is why I have recently made a step in my struggle with depression to open a part of myself that had always been slammed shut and locked tight, hopefully as an important step in healing from things that I never admitted hurt me.  I gave this hurt to somebody else and now he shares my burden so that it is not so heavy for me.  Telling him was the hardest thing I think I ever had to do, I felt that the strain of it did almost break me.  But now, finally, I do know what it is like not to feel alone.

So, what of 2012, what shall be in store for this year?  My resolutions are so extensive to me, I must actually sort them into a list of prioritized goals.

1. Restore my relationship with my son.  My little boy…  So, so much he has been through in his very short life.  And I think now, he is starting to have some issues with certain things that he has experienced in the past as well.  I hurt because in some cases, I don’t know the best or the right way to help him.  So, my little son and I are going to find a counselor to help us so that everything can be ok.  My worst fear would be to think that I was doing something to help him, and really that would be the very wrong thing.  That is why we are getting help.

2. I plan to lose 30 pounds by spring.  I totally acknowledge that it is obnoxious for thin people to be weight conscious.  Nobody hates it more than me when some twig bitches about how “fat” she is.  Please don’t think that is what I am doing.  I realize that I am blessed to have a decent figure and shape.  But, I just feel for myself, that I could be more satisfied with my appearance.  When I got pregnant with Shiny I was a lot thinner than I am now, and I would just like to get back there.  For one, I would feel so much better physically, and also I would feel like I was more appealing to my husband.  Even though he would never expect me to alter my appearance, I still would like to do this for him.

3. I would like to be making a decent living with art and writing by this time next year, hopefully published.  This goal is important, but is number three because it will actually probably be the most “work.”  I have to develop a very specific plan, work on a strong platform, and start organizing my projects to work toward the goal of $$$.  I have to open an online store and probably partner with a local business to help me in sales and packaging my products.  I have to start really cultivating this blog.  I need to give you, my sweet readers, things that will not only interest you, make you smile, make you nod your head in agreement, or scream at the screen in utter disagreement, but I also have to find a way to give you things you can use, and maybe teach you here and there.  Its going to be a lot of work.  And believe me, I’m totally bringing you along for the ride!