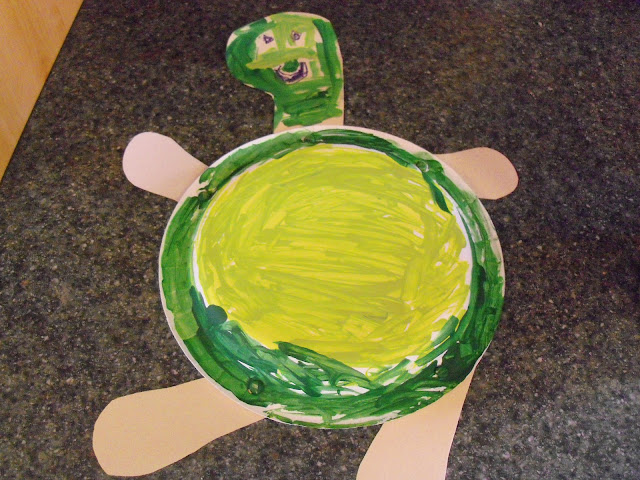 One of my little daycare dudes is having a slightly rough time acclimating to Kindergarten.  He is also new to my daycare, he started here about a week before he started Kindergarten.  He's not having a problem here, but just a bit of a rough time in class.  So, one of my daycare mom's and her son told me all about Tucker the Turtle and I decided we're going to use the Tucker the Turtle technique at Miss Dawn's Daycare and try and help out my little guy a bit!  Plus, its an excellent teaching behavior tool that will be nothing but beneficial to all my kids!

While searching online to find a Tucker the Turtle Powepoint presentation to print off for use in my first activity with the kids, I found this website.  Mrs. Jones provides a billions awesome teaching character activities for free here (including Tucker.)  Thank you Mrs. Jones, my children and I will be living and breathing by you over the boring winter minds when we need more help exercising our minds!  But that is where I found the Tucker story which will download as a 17 page Powerpoint that you can print out.  It also includes super useful teaching tips for using the Tucker technique with your group.

I decided to start the activity with an art project to get my kids engaged in the concept.  So, I had pre-assembled some cut out arms, legs, and turtle heads, which I attached to paper plates with brads.  Then, when everybody got home from school, I had their turtles waiting, and a selection of green paints, pencils, and markers so they could make choices about how to decorate their turtles.

I required the kids to be quiet and concentrate on their painting so that I could read the Tucker story and discuss it while they worked.  I elected the one little boy who was already familiar with the concept to be my helper, and he initially described what Tucker does so that their first exposure to Tucker came from their peer.  Plus, it gave that child the opportunity to be singled out in a special way.

The basic idea of Tucker is that as soon as something happens to make Tucker angry or upset, he stops to recognize his emotions.  Then, instead of lashing out, Tucker tucks inside his shell, keeping his hands and angry words to himself.  He then takes three deep breaths, still saying nothing.  Then, Tucker thinks of a solution.  The key to the activity is over time to give the kids a stock pile of possible solutions they can have on hand and ready to implement rather than angry reactions.

I love Tucker.  Our first activity went tremendously.  We are going to keep the turtles here at the daycare so that for awhile, when I see a child demonstrating a need to implement the Tucker technique, I will require him or her to actually go get their turtle, and show me with the turtle what they need to be doing.  We will be doing that during the time we work on other Tucker related crafts and projects until we move on to the next character.  I will keep you posted on how its going!
Posted by Grimdol Fair at 6:29 PM