Last year, on New Year's Day, I wrote a sentimental blog posting all about reflecting on the year that just passed.  This year, my reflection for 2012 is that it sucked balls, and its over.  Moving on.

This year I'm all about the future.  I'm over a year into my 5 year plan which ultimately ends in moving to Hawaii where I will sip margaritas and listen to my hubs strumming his guitar on the beach.  The plan is looking pretty good so far, believe it or not.  So I'm all about the future, and expediting the process as much as possible.

I do have several resolutions for the coming year, that would probably be pretty applicable for everybody, really.  My top resolution is to be stronger than my bad habits.  My habits boil down to being lazy really.  That's what I believe is at the root of succumbing to bad habits, and/or tendancies that we know are unhealthy, simple laziness.  It's either easier to just do things the wrong way, or if the habit itself doesn't actually make something easier, succumbing is easier than refraining.  That word "easier" is something I'd like to see myself steer clear of in the immediate future and ever more.  Easier is not always better.  Infact, the easier route many times leads to a lot of extra hassle down the road. 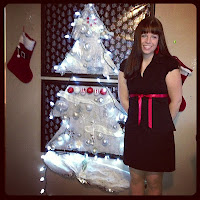 That being said, there will be an hour in my day set aside for exercise.  That is, getting up an extra hour early before everyone else gets up and starts submitting their demands.  I don't really know what the hell my problem is with exercising.  Prior to the arrival of the Shine, I was a pretty avid exerciser.  I always enjoyed it, and I always felt generally healthier and just BETTER.  Plus, I was pretty well stacked!  So, again, what is the problem?  I'm still a fairly active person, its not like I have an aversion to activity.  I think it boils down to sleep.  The arrival of my daughter Shiny brought about the end of sleep.  And I am realistic enough to know that the only possible time I can hope to incorporate regular exercise into my cram packed life is to sacrifice sleep.  More.  Sleep.  But, you know what?  I'm gonna stop dwelling on it and do it.  I did lose the weight last year that I wanted to lose, and now I need to keep it off, and shape it.  I do secretly dream of being a ninja or a contortionist, so the time is now. 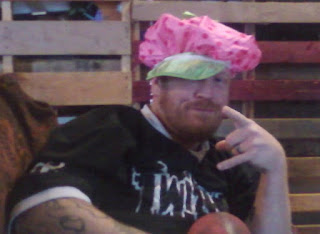 Additionally, I'll be the first to admit, another way I've become a total lazy slob is in the department of basic grooming.  Over and above the lack of exercise, hell, I rarely even brush my hair.  I've just gotten in this slump that I have a job where I get juiced all day by the bodily fluids of children, and I only actually see my husband for about an hour a day, if that.  So, I haven't really seen the point for a long time now, in looking pretty.  But there is a point, two actually.  For one thing, I have an incredible husband.  He deserves for me to take a few extra minutes to style my hair instead of simply pulling it back into a bun.  After I watched the episode of King of Queens where Doug freaks the freak out about Carrie's bun, I really started to feel like shit about that.
I can "bother" to put on a little make up and a cute outfit, even if my husband will only set eyes on me for a moment and then leave for work.  I don't believe it makes a difference in his feelings for me, but I've been thinking, maybe it would make a difference in the way he feels about himself??  Surely, it would make him happier to come home when his day is done.  And reason 2, it will certainly make me feel better about myself!  I'm not clueless enough not to know that I'm a lucky girl.  I was blessed with a pretty decent foundation to work with.  For me to ignore my temple to such a degree to which I do is a waste.  I fully know I'll one day look back on this time on my life and wish to have it back.  So, I believe placing a little more importance on my appearance is something important and worth my time. 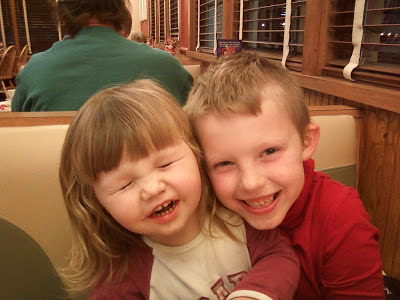 One thing about last year that was really thrilling was watching my children grow and all their benchmarks and turning points.  Jacob learned to ride bike with no training wheels, lost teeth, was cavity free, started kindergarten, and is now reading.  Shiny says her ABCs, can recognize several letters, knows her colors, has an extensive vocabulary, sings numerous songs, and can count to 20 at 2 years old.  (Sorry, shameless mommy brag there.)  Each time they learn even the smallest thing, it thrills me.  I will never ever get tired of that feeling.  I am infinitely proud of my children.  In the coming year and beyond, I want to seize more opportunities to help my children learn and keep them ahead of the game.  I have a whole arsenal of items on Pinterest that I am working through, doing with my kids and we enjoy it tremendously.  Check out some ideas here.

I'm at a time in life where I really understand myself.  I know exactly what I want, and where I am going.  I have priorities and goals, and I am diligently working toward them.  I'm comfortable with myself and not looking for anyone else's approval anymore.  I know who loves me, and who does not.  And I'm good with it.  I've let a lot of baggage I was holding onto... go.  I've cut the cords between myself and other people's misery.  THAT being said, I am now fully ready to explore and cultivate a darker side of myself that has always been there, but that I've carefully kept hidden away, for fear of what others may think.  This is me, this is what makes me most comfortable.  I don't care anymore what others may think because I know what the ones who matter think, and that's all that needs to matter to me.  My Etsy store is currently in "vacation mode," however in the next year you can expect to see some pretty cool stuff happening there, so stay tuned.  I also fully plan to have my novel, "Mary Contrary," in the works to be published by a traditional publisher by the close of this year, consider that my biggest business goal!

Be good to yourselves this year.  Realize what you have and work with it.  Let go of what encumbers you.  Realize and acknowledge your shortcomings so that you may develop a course of action to rise above it, rather than let it drag you down.  Nap as often as possible.  Stop drinking caffeine.  Give to someone who can't possibly pay you back.  Figure out where you're comfortable, then stay there.  Most of all, have a very happy new year from Under the Sun!