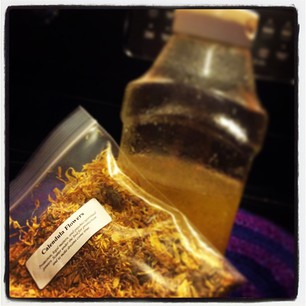 I originally made a batch of calendula infused oil for some apothecary projects.  Lotions, topical rubs, etc.  But today I discovered this stuff is positively magical as just plain oil!  Calendula is a flower known to have many medicinal purposes.  It is particularly useful for treating skin irritations such as eczema, mild burns, acne, cuts, abrasions, and other minor skin affections.  People use it in lotions etc. just as I have.  The things I made with the calendula were nice, but nothing turned out as useful as just the plain oil.

My 6 year old son has terrible seasonal allergies.  His poor little runny nose has had about enough.  One nostril and surrounding area got severely inflamed and abraded from the excessive blowing and wiping.  To the point where it was bleeding.  By this morning, the congestion had subsided but his nose looked just awful and was causing him a lot of pain and aggravation.  I was going to put neosporin on it, but he was prepared to fight me to the death over having it applied.  So, I finally convinced him to let me treat it with the calendula oil I had on hand.  I had some of the other things I'd made to use, but something just told me, use the oil instead of lotion.  I keep it in my refrigerator, so I think it also helped that it was cool.  To my delight, after I put some of it on a cloth and gently applied it to the affected area, that little boy melted.  He closed his eyes, said, "oh that feels so good," and was content to sit there as long as I wanted him to receiving the treatment.  Believe me, this is huge, my little kid does NOT like being messed with for any medical purpose.

The bleeding stopped immediately, and what was a horrible looking injury crusted with blood despite constant cleaning, became a mild looking irritation.  It did not bleed again the rest of the day and the inflammation continued to diminish.  He also happily reported that it didn't hurt anymore, and I have to imagine the itching annoyingness had diminished because I noticed he'd stopped messing with it.  I reapplied the treatment several times through the day simply because he said it felt so good and I think its going to heal so much faster now than it would have without the treatments.

Here is how I made this super easy DIY home remedy, Calendula Infused Oil.

What you will need:
A large, old, washed ketchup bottle
4 oz of dried calendula
bottle of sunflower oil (could use extra virgin olive oil)

I get my calendula from The Magickal Cat.  Please don't be put off by the fact that this is a witchcraft supply store.  Witchcraft is a natural craft using the resources of the Earth and nature to bring about positive results.  Putting aloe on a burn=witchcraft.  Lighting a candle at a wedding=witchcraft.  Drinking chamomile tea=witchcraft.  So, don't be afraid to buy useful items from these guys, because let me tell you, they are THE BEST online sellers of ANYTHING.  They have everything you could ever want, they ship almost immediately, and I've never waited longer than three days to receive an order from them!  Plus, they're prices are phenomenal.  Sunflower oil, you can get at Walmart or your local grocer.

Now, once you've used up your ketchup, wash the bottle and allow it to thoroughly dry.  This is important, make sure there is NO WATER or moisture left in the bottle when you make your oil.

Put your 4 oz of calendula into your bottle.  If you get it somewhere else, than The Magickal Cat, or you grow it yourself, you must make sure that it is completely dried before you use it.  Reason being, you don't want any water in your oil while you're infusing to prohibit the growth of harmful bacteria.

Once your calendula is ready and in the bottle, simply fill the bottle on top of the flowers with the oil.  Then set it on a sunny windowsill for about two weeks!  I personally spent time holding the bottle and charging it with positive energy, focusing my intention of healing on the oil, visualizing what I hoped the oil would do once it was ready.  I did this periodically through the two weeks.  But here again, witchery not necessary, its whatever swings your string!

After the pretty flowery oil has graced your window for a couple weeks, you will need to remove the flowers.  I did this by using a clean, sterilized DRY jar.  You can sterilize it by submerging it in boiling water and then of course, let it dry.  Then, I took a pair of unused panty hose, and put it over the lid of the jar, allowing it to droop a little bit into the jar, and I strained my oil into the job.  Then, I discarded the flowers, washed and sterilized the ketchup bottle again and let it dry, then returned my strained oil to it.  And VOILA, done!

The result of using this oil on my son's little sore nose was INCREDIBLE.  He made me put it on every little boy scab he had!  I myself sometimes get abrasions on my face because of acne (yes, apparently it never ever EVER goes away.)  I can't WAIT to use this next time that happens.  Huh, that's kinda crazy.  The magic was so amazing I can't wait to get a zit???

Calendula is also thought to have other magical uses.  It can be used in mojo bags, or medicine bags.  These are a kind of "good luck" charm that can be made to protect, heal, or help a person accomplish an intention.  Calendula can also be sprinkled under the bed to make dreams come true!

Join me on Pinterest for more DIY tips and treats!
Posted by Grimdol Fair at 9:40 PM