Elf of the Shelf Ideas for the Busy (ahem lazy) Parent 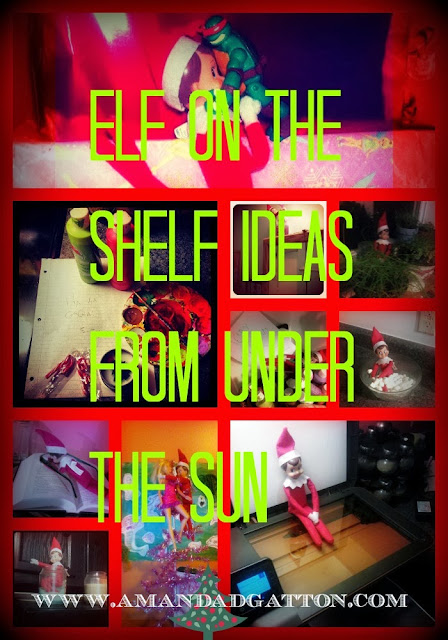 Here are 10 ideas for parents in a pinch to keep up with what I fondly refer to as: That Damn Elf.  Let's face it, That Damn Elf is mega creepy and an ultra pain in the ass.  However, in my house at least, the absolute joy and delight he brings to the kids far outweighs any nuisance he brings me.  My problem is that I often forget about him until my eyes are just closing at midnight or later and then I'm lurching out of bed in a sleepy haze trying to figure out what the hell to do with the thing.  So, if this is a problem for you, here are a few quick and easy, "Crap, I forgot to move That Damn Elf" ideas for you! 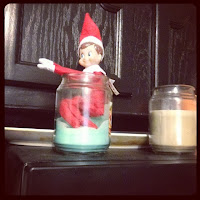 Remember, if this is not your elf's "first" year, December 1st doesn't need to be anything spectacular!  This is just the day the elf "reappears" in your house, so he can pretty much just pop up anywhere.  I suggest someplace not too obvious, but yet somewhere the kids will eventually notice him sometime during the day, their faces will melt into beaming grins and giggles, and Christmas delight can officially begin!  I swear that our elf's reemergence in our house via a candle is no reflection of any desire on my part to set him on fire. 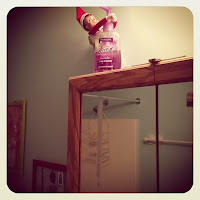 Putting the elf in any remote location doing random things that don't make much sense, or appearing to use household items is always good for giggles and conversation in the A.M 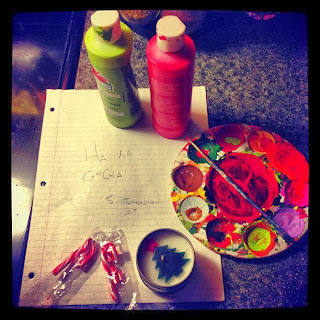 This one was actually a little more complex.  However, it was H-I-Larious.  What I did was this:  I left this little set up in the kitchen, a note from the elf saying "ha ha, gotcha."  On a night when my son and daughter fell asleep together in one bed, I dangled the elf from a curtain rod over their head and then I put tiny little red and green paint dots on their face.  I then taped another note to the wall next to the elf, FROM the elf, apologizing for elf pooping on their face.  I made it a poem:

I felt a familiar feeling I thought would be a toot
Much to my surprise it became and elf poop
I was climbing on your curtain rod to go to sleep
When the farty feeling began to creep
So sorry that while you were tucked in your cozy place
I accidentally mad elf poop on your face
Sorry,
Skullberry Twinklejingle xoxoxo
Gross?  Sure.  But kids love gross stuff.  It was legendary. 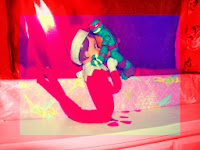 Here we have the elf valiantly defending a stack of wrapped gifts from a dastardly ninja turtle! 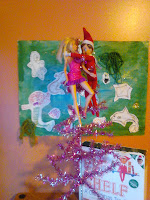 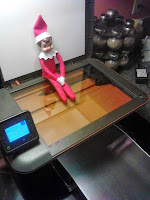 Not for sure why this one tickled me so much but...  That Damn Elf...  Xeroxing his buttocks.  Ho ho ho. 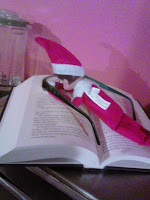 That Damn Elf having a read.  I'm pretty sure he was reading 50 Shades of Grey here.  A little mommy humor. 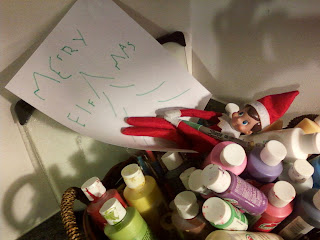 Any and all opportunities for the elf to create art is always well received.  Plus, it creates keep sake items. 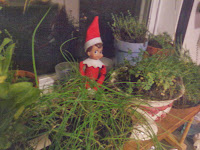 Got any house plants? Why not have a gardener elf? 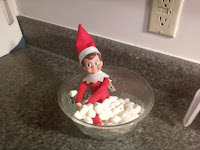 The good old fashioned "elf bath" in marshmallows is always good for some giggles as well.


Last year, our elf also once dragged my son's matress out onto the front porch on a night Jacob was spending the night elsewhere.  Apparently the elf was a bit upset that Jacob was gone.  That one was pretty much priceless.  The elf has also performed on various musical instruments, toilet papered the tree...  And, there was the unfortunate incident where he slipped out of his hat and fell into the potty.  Honestly, that one threw me for a loop and I actually did think he moved on his own that night and nearly lost my shit.

Well, happy holidays!  Thank you Gatton family elf, Skullberry Twinklejingle, for being such a great sport.  I'm sorry I call you That Damn Elf all the time, you're not so bad!