How to Make a Garden With Pallets 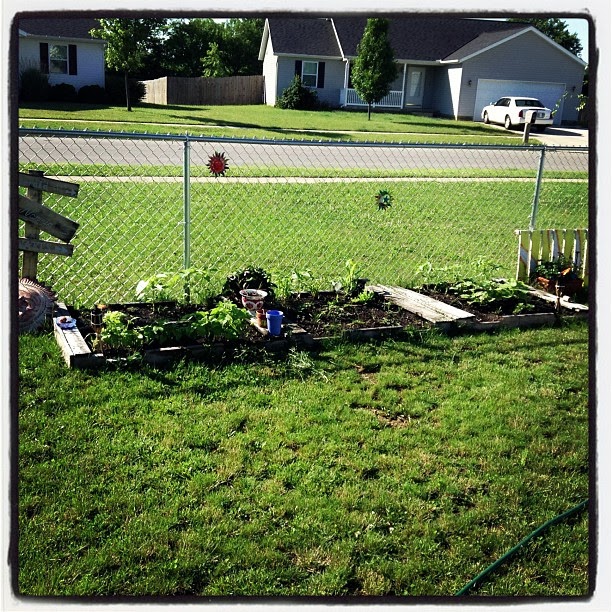 Last summer, I made a LOVELY little raised garden out of shipping pallets!  It was a cost effective and super fun project, plus a great way to repurpose.  I am pretty much obsessed with shipping pallets, and I particularly love them for outdoor projects.  When using pallets for an indoor project, it's very important to be very careful and selective when selecting pallets, because you could introduce bugs into your home.  However, outside, this isn't that big a deal.

Coming by pallets is not too tricky, and you can very likely find good ones free.  If you give it a little time, you shouldn't have to buy them.  However, if you can't find any suitable for indoor use, there are plenty of places to buy them.  I get my pallets quite simply by putting a shout out on Facebook asking if anyone knows where I can find any, and bam, I have my pick of pallets. 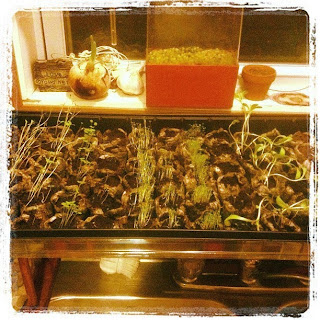 I started my pallet garden long before summer.  I purchased seed starter kits from Walmart.  I researched exactly what I wanted in my garden, and which plants were appropriate to be started in doors early.  I then purchased my seeds from Seed Needs off Amazon.  I love Seed Needs!  Those guys have a bazillion options and I had great luck with their seeds.  I wanted some pretty obscure herbs in my garden, and Seed Needs had everything I wanted and great prices.

Of course, inside starting is not a necessary step in my garden, so you can probably spare that seed starter expense if you want.  However, I will say, I suffer from seasonal depression which is particularly harsh in the winter time.  My little kitchen garden gave me a lot of joy through the winter, and brought the spring time inside to me all year round.  When I planted my seeds in the starter pods, I had sprouts within days. 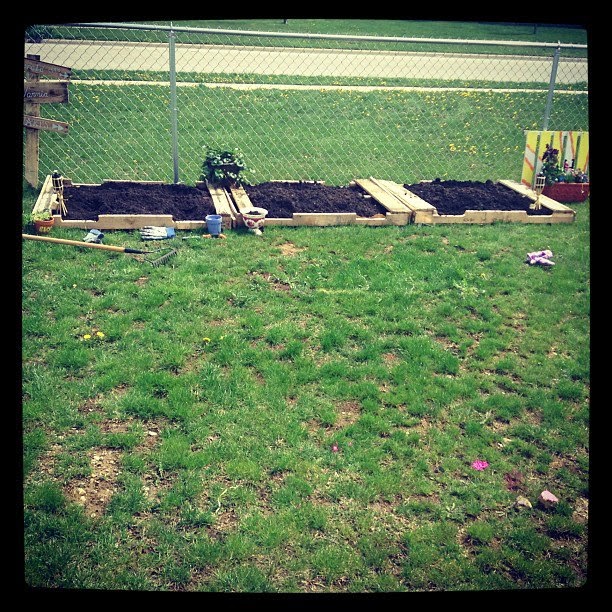 Once it was warm enough, I prepared my outdoor garden, but I didn't actually plant any seeds or transplant any plants from inside until May 15th.  In preparation for planting, I selected my three pallets that I wanted to use for my beds.  I laid them upside down in the spot where I wanted them.  I am lucky to have a fenced in yard, and so I put them up against the fence so that I could plant tomatoes and cucumbers along the back and use the fence to tie them up.

I decided to line my pallets with cardboard.  This was so that I would have to purchase less dirt.  In retrospect, I would probably advise you to instead, dig a small indenture in the dirt, place the pallets down in it, and don't line it.  If you are only going to use the pallet garden for flowers, lining is fine.  However, several of my vegetables such as the carrots and tomatoes, never really flourished and I suspect it was because they couldn't get their roots deep enough.  They grew and looked pretty, they just never produced or got very big.

I then filled the pallet containers with dirt.  Each pallet took 3 40 lb bags of dirt, and 1 40 lb bag of manure.  I then mixed the manure and let it sit until May 15th. 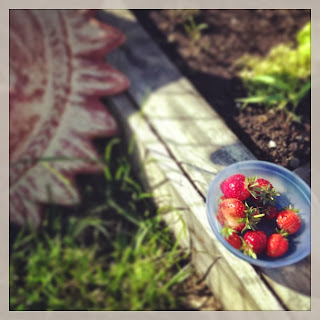 In the mean time, any eggs that I used inside, I kept the shells.  Once the shells dried, I crushed them.  I drew a diagram of where I wanted each plant.  The far left pallet, I used for vegetables.  The middle pallet was my herb garden, and the third pallet was for a pumpkin patch.  I also planted marigolds all around the peremiter.  I have always been told that marigolds will keep animals out of a garden.  I don't know if that was what did it, but I had zero problem with animals in the garden despite a surplus of strays around my neighborhood.  So I definitely recomend the marigolds.  When my kids and I planted the garden, we lined our seed wholes with the crushed egg shell powder.  This is said to lend an extra calcium boost to the plants.  Again, because I had great success with this and beautiful plants, I recomend that egg shell step.  One thing I would suggest you steer away from however...  I had interspersed sunflowers along the back row among the tomato plants, cucumbers, and corn...  Those three plants didn't do very well and I suspect it was partly because the gigantic sunflowers stole their sun.  So, if I do this again, I definitely won't put in so many sunflowers. 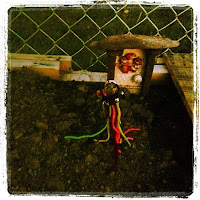 Finally, we added our own little handmade fairy door and maypole in our pallet garden.  A little magic in the garden certainly never hurts!  And don't forget your rosemary by your "garden gate!"

Another garden tip I learned from this project, I selected leaf lettuce to grow in the garden.  Being a gardening newbie, I thought maybe it would be easy to harvest.  YUCK!  It tasted awful.  Definitely would AVOID leaf lettuce, or more carefully research just what kind to plant!!!!

Our pallet garden was wonderful.  My kids and I had endless enjoyment tending it, watering it, and eating the things we grew throughout the summer.  I think this is a great way for a someone new to growing such as myself, to start out. 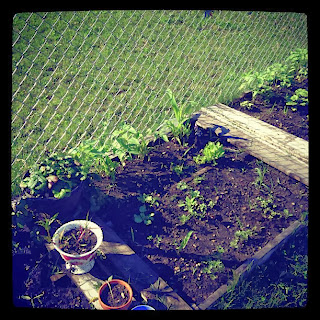 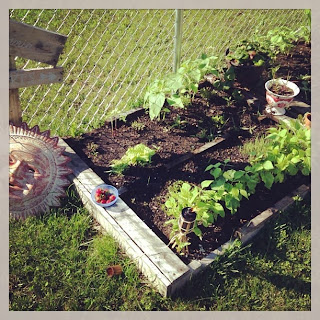 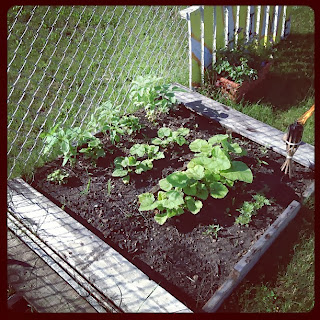 Even our plants that didn't produce still grew and looked pretty, and lended awesome fragrance to our yard and play space!

In the tail end of the season, we moved in with my mother in law for ten weeks.  The garden wasn't tended by the people who lived in our home while we were away.  However, when we did return home, I was delighted to find that even though it was November, several herbs and veggies had thrived!  So, in the end, my pallet garden ended up just where it started...  In my kitchen window! 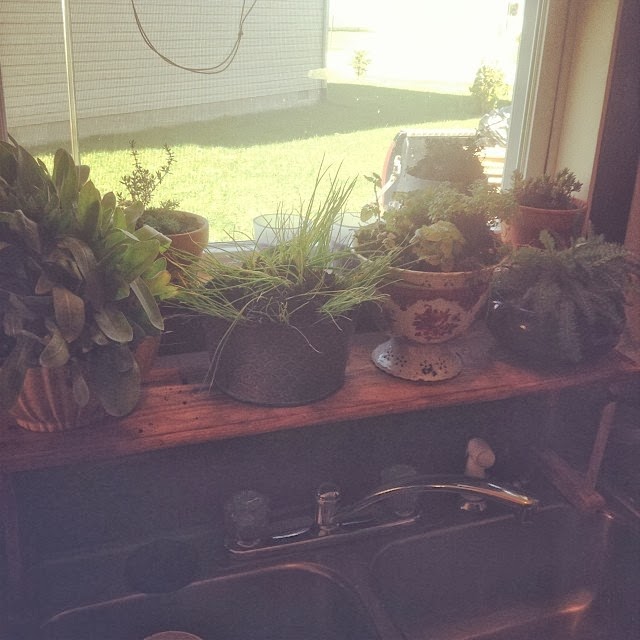