When I was pregnant it’s my son back in 2006, I spent a lot of the time on bed rest. My then eight year old step daughter was so sweet and hung out with me through all the bored times of not feeling so hot. We would draw and daydream together and during that time we invented “The Funnyfamilies.” It was a children’s book series based on her, her sister, and my yet to be born son. The trio got into endless zany adventures due to the fact that their lovable but ditzy mother always got distracted and stopped paying attention to them. This series has been a labor of love that I’ve returned to many times over the years and imagined the characters again and again. Here is an example “dummy book,” which is a thumb nail catalog of what the illustrations will look like in a picture book. Beneath the dummy, enjoy some Funnyfamily character illustrations and the full text of a Funnyfamily story! 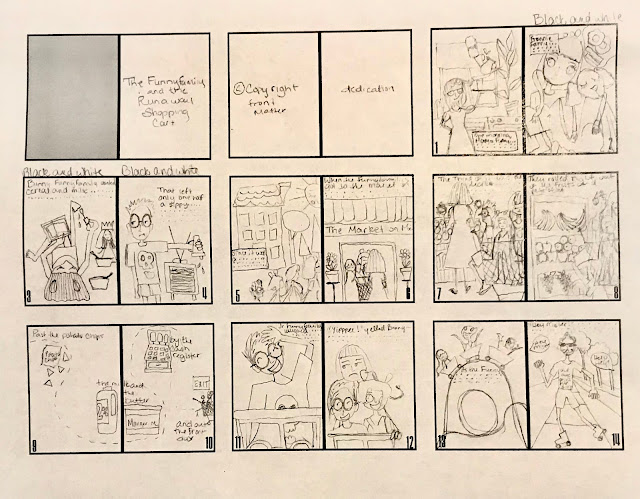 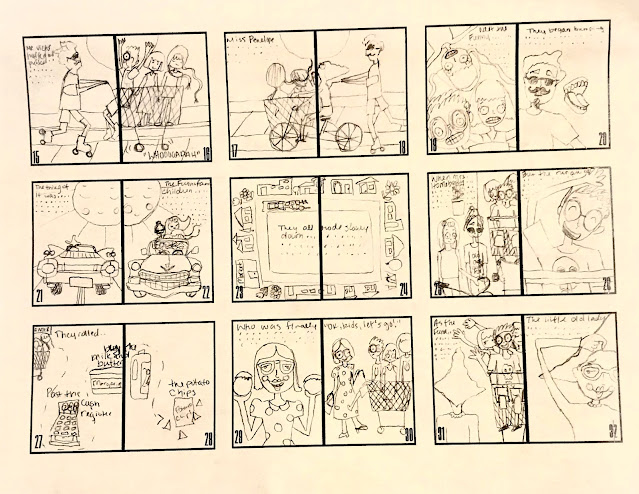 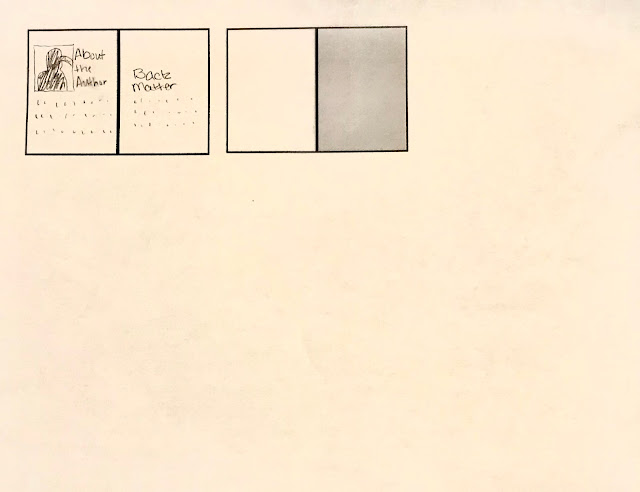 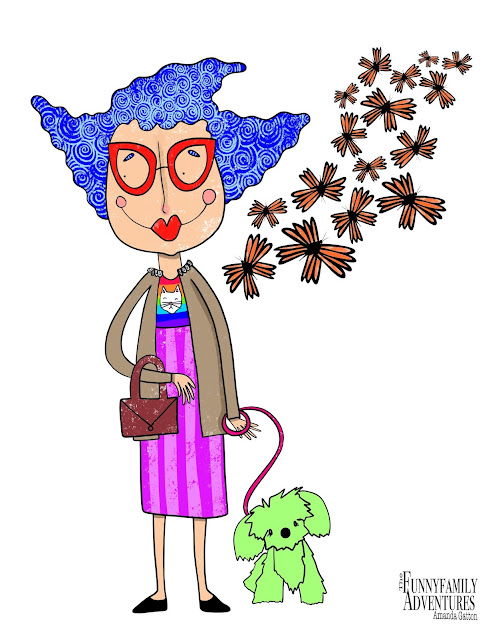 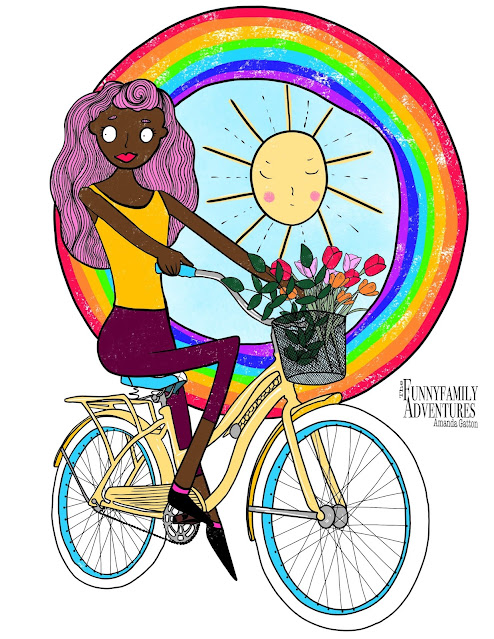 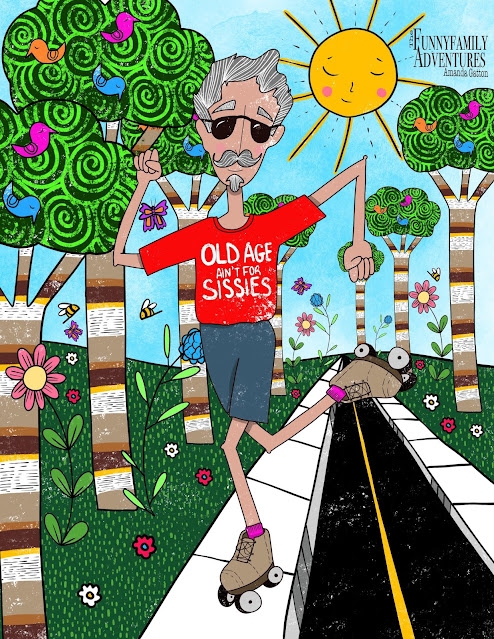 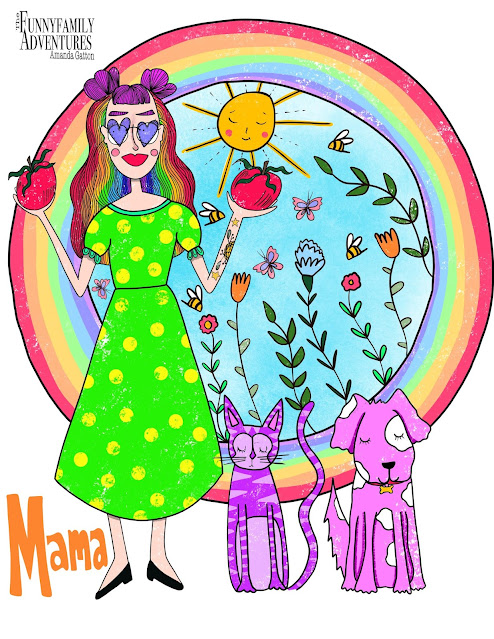 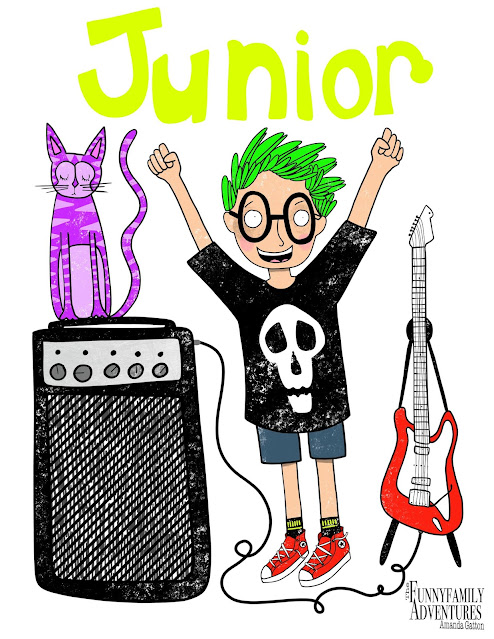 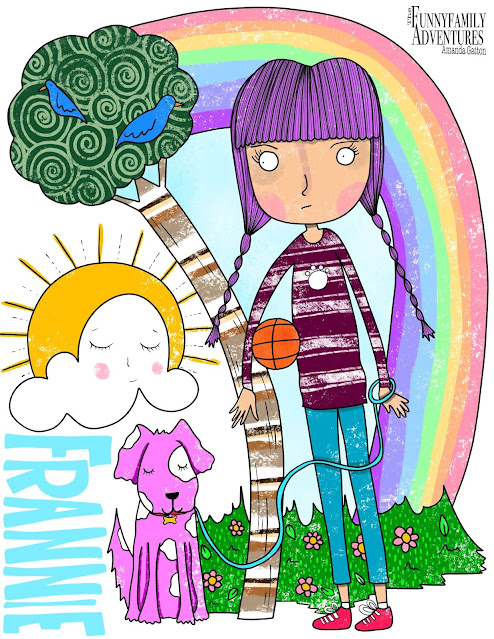 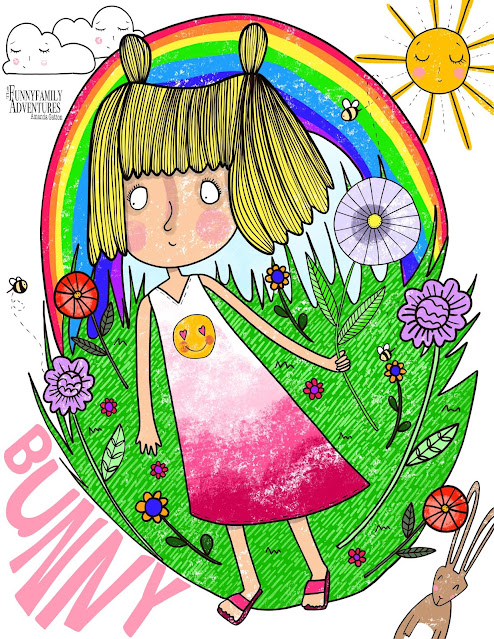 2 Frannie Funnyfamily wanted eggs and bacon, out on the porch, with the dog. But all they had left was one egg and no bacon.

3 Bunny Funnyfamily wanted cereal and milk to share with her favorite princess while reading a book and painting her toenails. But there was only enough cereal left for half a bowl.

4 That left only half a sippy cup of milk for little Junior Funnyfamily to enjoy with his morning cartoons. All the Funnyfamily children were still hungry.

5 Since it was a sensational, suntastic day, Mama took the Funnyfamily children for a walk to The Market on Main.

6 When the Funnyfamilies got to The Market on Main, Mama pushed the children in a shopping cart, humming softly while she shopped.

7 The thing of it was, the market floor had a slight slant. So, when Mama turned around to test tomatoes, the cart and all the Funnyfamily children began to roll away.

8 They rolled right out of the fruits and vegetables…

9-10 (spread) past the potato chips, the milk and butter, by the cash register, and out the front door!

12 “YIIIIIIPPPPEEE,” yelled Bunny as they rolled down Main Street.

“This is not good,” worried Frannie with a frowny face.

13 As the Funnyfamily children rolled, they began to pick up speed. They rolled faster and faster. Junior and Bunny yelled like kids on a rollercoaster.

14 “HEY MISTER!” yelled Frannie, to Mr. Victor, who was coming up on his roller skates. “HELP, HELP! We’re in a runaway shopping cart!”

15-16 (spread) Mr. Victor huffed and puffed with all his might. He caught up with the runaway cart and grabbed onto the handle. The thing of it was, the cart did not stop and the Funnyfamily were now dragging the little old man with their runaway shopping cart. “WHHHOOOOOAAAH!” he cried.

17-18 (spread) Miss Penelope, taking her morning bicycle ride, saw the Funnyfamily children, dragging poor Mr. Victor along, and she figured out what was going on. She peddled with all her might, rode up next to the shopping cart, and grabbed on.

The thing of it was, the cart still did not stop! “Everyone, hold on!” shouted Miss Penelope, woefully.

19 Next, the Funnyfamily children, Mr. Victor on his roller skates, and Miss Penelope on her bike, all rolled quickly around the corner onto Bumpy Boulevard.

20 They began bumping and jumping so much and so hard, Mr. Victor’s teeth rattled right out of his mouth!

21 The thing of it was, old Mrs. Homebody, in her pink car, was stopped at a stop light dead ahead of them. They were about to crash! “AAAAAAHHH!” they all screamed.

Luckily, Mrs. Homebody didn’t drive very fast. She pulled the unfortunate Funnyfamily children, Mr. Victor on his skates, and Miss Penelope on her bike, slowly along. “WHHHHOOOOAH!” they all yelled. But, Mrs. Homebody never heard them.

23-24 spread They all rode slowly down the street, around the corner, and then up the block. The next thing they knew, Mrs. Homebody pulled all of them into the parking lot of The Market on Main, right where their adventure had first begun.

25 When Mrs. Homebody brought her car to a stop in front of The Market on Main, Mr. Victor on his skates and Miss Penelope on her bike let go of the shopping cart. The Funnyfamily children came unstuck from Mrs. Homebody’s bumper.

26 But, the runaway shopping cart kept right on rolling! The Funnyfamily children rolled right into The Market on Main. Junior Funnyfamily laughed with glee and waved hello.

27-28 spread They rolled past the cash register, by the milk and butter, the potato chips, and finally came to a stop right behind Mama…

29 Who was just finishing testing the tomatoes.

31 As the Funnyfamilies left The Market on Main, they saw Mrs. Homebody. The Funnyfamily children waved and smiled sweetly at her.

32 The little old lady frowned and scratched her head in confusion, wondering who on earth those funny little children were...

To move back to the previous page of Amanda Gatton's art gallery, click here.

To proceed to the next section, Folktale Week click here.
Posted by Grimdol Fair at 10:37 PM