This story was written by one of my FNAF Mashup clubs on Outschool and myself.  The students who worked on this fantastic tale of horror are Serenity, Logan, Mason, and Charlie. We love the INSANE lore of FNAF and we hope you enjoy this twisted tale and its shocking turns!

Jordan’s mother Marissa had mainly never been in his life. She was one of those people who had a kid really young, and due to the fact she had a lot of life problems, she got on drugs before Jordan was even born. She ran around a lot and got in trouble a lot, and when he was really little, she ended up in prison. So he grew up living a quiet life with his grandma.

But now that he was twelve, she was back around. She’d spent ten years in prison and when she got out, from what he’d been told, she really turned her life around. She stayed clean, stayed away from the bad people she used to know, and got a job. She lived back in their same old home town, in a tiny apartment just a couple blocks away where he could walk and visit her anytime.

Problem was, he didn’t really do it much. He didn’t know the lady, and she was an odd duck. She was very quiet and when she did talk it was always kind of quick and short. Rough around the edges, his grandma called it. She was really pretty and in really good shape with long black hair all the way down her back. Grandma said she’d exercised non stop in prison and now she was just like this super healthy person. But she also always wore black clothes and boots and a black leather jacket.

Everyone said Marissa was doing so great, but to Jordan she still kind of seemed like some sort of tough person. And he didn’t know if that was a good thing. 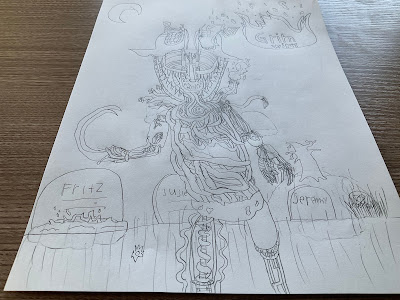 One Friday evening, Marissa got it in her head she was going to take Jordan to Freddy Fazbear’s, that old dumpy pizza and game joint in town. She talked about it all week, and it was sort of the most excited he’d ever seen her. It was obvious she really wanted to to work on making things better with him.

Trouble was, that place was stupid. All those stupid made up stories about the place that everyone always talks about and believes. As if a restaurant would actually stay open if children went missing there, and creepy robot looking animal characters killed people. Please. It was all so stupid. He suspected it was the only thing this miserable, tiny, dumpy town could say they had that was interesting. Thing was, he never had bought into it, not even when he was a little kid. And, the restaurant itself was disgusting, beat up, dirty, and gross.

Somewhere down deep, he guessed he was a little happy to see Marissa making an effort, but it was obviously going to be another miss since she didn’t even know him well enough to know that he didn’t like rubbery pizza and baby games.

So that’s how he ended up at Fazbear’s on a rainy Friday evening, feeling massively uncomfortable. They sat across from each other in a small orange booth. Jordan looked around incessantly thinking if he actually saw anyone he knew, he would probably die. But, the average patron age was about seven. Which maybe was worse, he wasn’t sure.

Marissa had started out oddly smiley, but had since retreated into her usual somber quiet. She could clearly see Jordan’s discomfort and figured out quickly that this had been a bad idea.

The place was teeming with noisy children and the clatter and ding of games. It smelled like clogged arteries with a slight hint of cigarette smoke, even though nobody had smoked in restaurants for years. The worst thing about the place were these incredibly weird statues of life sized animals. Actually, they were bigger than life sized. So far Marissa had spotted a purple rabbit with a menacing grin, a brown bear that looked like a muppet with a personality disorder, an orange fox who was for some reason dressed like a pirate, and a yellow bird with purple eye shadow, a baby bib, and a weird cupcake that had eyes and teeth. The statues were stationed in various spots around the place. The bird behind a long table in the back of the dining area. The bear hulking at the edge of a small dance floor made of dirty cracked tiles. The bunny lurked in a dark hallway that led to bathrooms. And the fox… Well the fox had his very own cove hung with tattered curtains.

Marissa had asked Jordan numerous times to play games while they waited on their pizza to arrive, but had only received uncomfortable muttered refusals. His rolling unease was contagious and her mood plummeted. She kept watching him looking around with a look of embarrassment on his face and seriously considered taking him and leaving. This had been a dumb idea.

It seemed like that stupid bear was staring right at her.

It sent a shiver down her spine.

She leaned close to her son. “What’s with those stupid stuffed animals?” Marissa whispered.

“Yeah. They used to actually move, like robots or something. But they’re expensive to keep up and they broke down a long time ago, so now they just leave them hanging around as if kids like freakish murdery looking stuffed animals while they’re trying to have fun.”

Marissa burst out laughing. Her uncharacteristic moment of brightness brought a smile to Jordan’s face as well. He giggled.

“Get this, there’s all sorts of local legends,” he said, giving quote fingers around the words local and legends. “Claiming those things are possessed by the souls of missing children who were actually murdered and shoved inside them.”

Marissa cackled. “Dude, are you serious?”

Jordan cracked up. He’d never really realized how dumb it all sounded. “Yeah, serious as a heart attack.”

“Man, that is LAME!” Marissa joked.

Just as the two shared another light hearted laugh at the expense of the poor forgotten animatronic characters of Fazbear’s, their pizza arrived. They both realized they were famished and hurried to grab plates and load them up with pizza. But as soon as Marissa took a bite, her mouth dropped open and the pizza tumbled out and back onto the plate.

“Oh YUCK!” She cried, scrambling to take a huge gulp of her pop. Jordan almost fell over laughing. “That is the worst pizza I’ve ever tasted!”

Hardly even able to breathe through his laughter, Jordan replied, “sorry, I guess I should’ve warned you.”

“Yeah you should’ve!” Marissa cried, really hamming it up by using her napkin to wipe off her own tongue. “I didn’t even know pizza could be messed up. Jeeze. Gross.”

She smiled again watching Jordan laugh hysterically and for the first time ever, she had a special unmistakable feeling. Like a warmth in her chest. This was her son. Her child. Something happened in her heart.

“Let’s just have chocolate and candy for dinner, get all crazy on sugar, and win every ticket in this place,” Marissa suggested.

“YEAH!” Jordan cried. The two slid out of the booth to head for the snack station.

Never in a million years would Jordan have predicted that he would play every game at Fazbear’s seventy times and stay till closing time, and have FUN. But that’s just what he and Marissa did. They had an insane ball of tickets which they couldn’t wait to cash in. They had agreed that if they had enough together, they were totally taking the skateboard that was suspended above the prize area.

The lights blinked on and off a couple times and the sound of a nice pleasant lady’s voice came over the intercom warning everyone that it was time to close. Please deposit any refuse in the nearest waste receptacle and proceed to the prize counter to cash in any tickets.

The thought of returning to real life outside the dimly lit haven of arcade games, air hockey, and games of chance suddenly made Jordan aware he was bursting at the seems with Pepsi.

“I gotta use the bathroom,” Jordan said.

“Me too,” Marissa agreed. “My eyeballs are swimming!”

Jordan burst out laughing. He didn’t even know what she meant, but now that she was opening up more he was seeing that she said lots of funny weird stuff like that.

They went together toward the bathroom. Once in the hallway leading there and away from the din of the games and dining room, Fazbear’s took on a new vibe. One of late night, and how nothing good happens after the sun goes down. The hallways seemed longer than it was and it smelled like sweat. The red walls were lined from from floor to ceiling with framed black and white photos of children with those stupid animatronics. And photos of when the animatronics had actually worked and performed as if they were a real live human band. Jordan glanced only once at the photos as they passed and then consciously made sure not to look again on the way to the bathroom.

They parted company at the doors to their respective bathrooms. Inside the women’s room, Marissa was surprised to find it empty. She would’ve thought there would be more people hurrying to make a pit stop before going home. But when the heavy door swung shut behind her, it was like she was suddenly in a vacuum. All hints of the world of Fazbear’s outside that door vanished in a hazy glow of dusty humming lights and deathly quiet.

Marissa’s heart began to pound a little, and she suddenly wanted very much to get back to her son. She hurried to do her business and wash her hands and was soon leaving the bathroom, having only spent about ninety seconds inside.

Back in the hallway, it seemed almost as though it had gotten even darker. And none of the noise that had been there when she went in, returned when she came back out. It was eerily quiet, in fact. Seconds after she emerged, Jordan came out, his face looking pale and unhappy.

“Ready?” She asked in a voice that was way too chipper.

He nodded and they hurried down the hall, shoulder to shoulder. As they came to the end of the hall that led back to the dining area, they brushed past that awful purple rabbit that towered far over their heads, and a shiver raked up Marissa’s spine.

When they stepped into the dining room, they found it one hundred percent absolutely and completely empty.

Matter of fact, not only were there no people, but the lights were all now out, the games quiet, and there was nothing but pale strips of security lights going. Some chairs were knocked over, and maybe an inch of grime and dust seemed to cover everything. Some of the arcade games sported broken screens that seemed like angry eyes staring out over a deserted place.

“What the…” Marissa murmured.